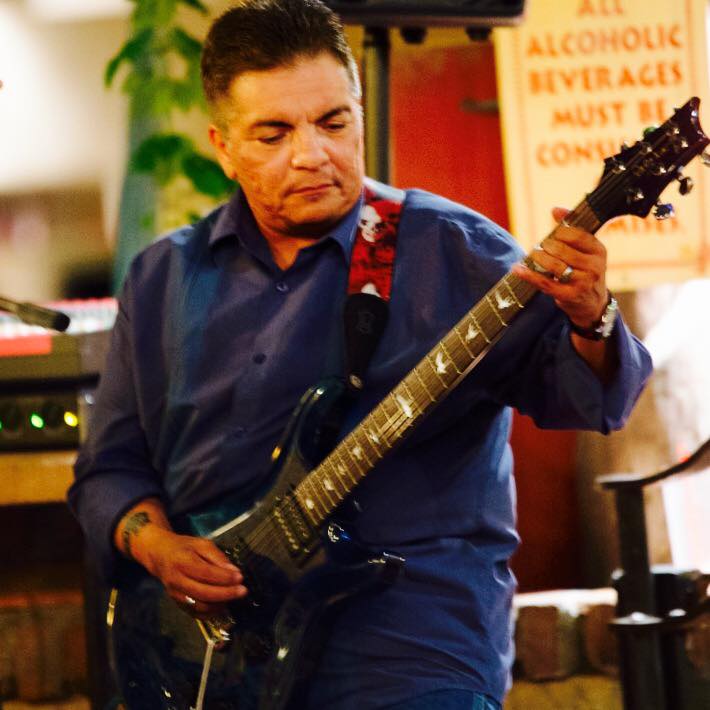 "The first thing I remember and the main thing that had an impact on me was music.  Music was everywhere in our home." ~D'Santiago Nava
D'Santiago "El Brujo" Nava is a native of Santa Fe, NM with musical bloodlines that go back over 300 years In Europe, Latin America and good ole USA.
D'Santi brings a interesting blend of rhythmic sounds from his indigenous cultures, childhood love of classic ...rock, classical guitar training, nuevo flamenco and all eras of blues. D'Santi has been a musician for over 40 years being self taught since the age of 7, guided by his brother Daniel Nava, studied with Craig Dell, Willy Chills and most recently with Roberto Capocchi. D'Santi Nava has a unique Amadeus quality in composing several original songs and a gifted ear capable of memorizing songs daily.
He has been an integral part of the music scene such as the Navas for 5 years, the Tangents for 18 years, Collective Measures for 5 years, Underground Cadence formerly Double DD for 4 years and Los Esmitz for about a year.  Several private gigs with Guitar Shorty among nationwide and worldwide talent that live in NM part time. D'Santi Nava completed a 13 state jam tour in 2013 playing through the Midwest.  In 2014, he completed a 6 Southern state jam tour ending by jamming with musician friends in Key West.  In 2015, he sat in with Ozomatli at the Sunshine Theater in Albuquerque, NM.  December 2016 & January 2017, he will be back in Key West sharing his Nuevo Flamenco Originals.
He currently plays as a soloist sharing Nuevo Flamenco originals, is lead guitar with Underground Cadence (Rock/Blues Cover&Originals Band), SMOOTH Santana Tribute Band, lead guitarist with Shelley Morningsong, duo with local vocalists and as a musician for hire in all music genres.
His main influences range from Santana, Hendrix to Jesse Cook, and Los Indios, Strunz and Farah to the Gypsy Kings.
D'Santi Nava believes playing music brings healing to the soul!

"Martha Reich sings with the fierce vocal Grace of a James Taylor and the Soulful emotion of a Judy Collins. Perspective words, combined with penetrating sounds, emanate from Martha's acoustic guitar, sure to reverberate the Heartstrings of any awakened Soul."
With vocals reminiscent of icons like Joni Mitchell and Joan Baez and an originality impossible to duplicate, Marthaʼs songs possess an ex...quisite poetry, capturing the depth of personal and universal subjects, while tapping into something true and real for all that listen deeply with their minds as well as hearts.
Her deep roots in traditional folk and story telling shine through each and every one of her original works. Ira Gordon-Host of Santa Fe's KBAC radio-calls Martha "the closet thing to Joni Mitchell that Santa Fe has."
"I love your music" ... Sam Shepard, Playwright and Actor.

This website was built with Webnode
You can also have an impressive website for free!
Try it out